Our Ship of State Is Foundering

The Ship of State is a famous and oft-cited metaphor put forth by Plato in Book VI of the Republic. It likens the governance of a city-state to the command of a naval vessel and ultimately argues that the only men fit to be captain of this ship are philosopher kings, benevolent men with absolute power who have access to the Form of the Good.

The modern definition of Ship of State: the affairs of a state symbolized as a ship on a course

Foundering: to come to grief

Here are some graphic images that illustrate that appearances are no guarantee of future success. Just like the Titanic, our US ship of state has some serious problems that are being ignored. The Titanic was sent to sea with some serious omissions, plenty of deck chairs, and not enough lifeboats. We have an administration full of people with criminal intentions and backgrounds to match. Just like the Titanic, our new administration is heading out with no attention on the warnings it is receiving. 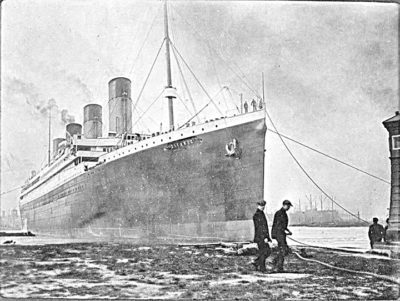 This entry was posted in Bigger, Meaner Government, Challenges to overcome. Bookmark the permalink.