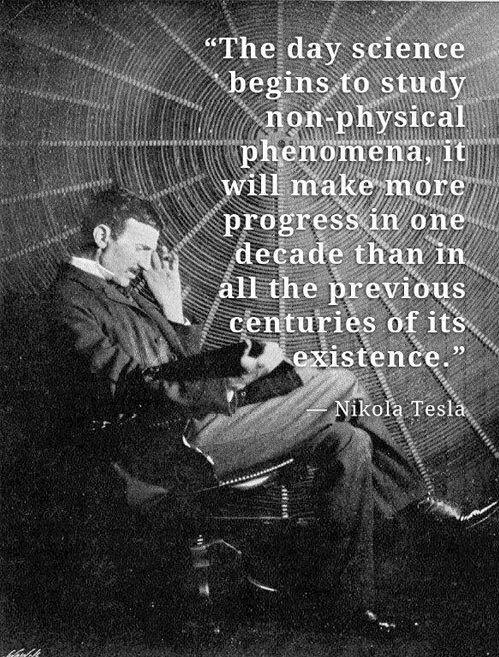 I want to thank you for posting the image of Nikola Tesla with the quote, “The day science begins to study non-physical phenomena, it will make more progress in one decade than in all the previous centuries of its existence.”

It triggered a realization that will completely transform the technology I have been working on for the past decade.

The unexpected realization was that I and my students have learned to perceive non-physical phenomena and can extract information from that phenomena without any dependence on physical universe perceptions!

The apparent resistance to our findings and subsequent conclusions comes from the fact that people who cannot perceive non-physical phenomenon are barred from inspecting them and understanding them.

I have been able to teach students and clients to perceive non-physical phenomena without realizing how outrageous this appears to those who are seemingly barred from exploring this phenomena.

One example of a word describing a non-physical phenomenon is “intention”. We can see the results of an intention by the effect on the physical universe. More importantly, we can actually directly perceive intentions by running a person through a few simple exercises.

Without getting into the hoopla of trying to measure telepathic ability by reading symbols on distant cards, we can also get a person to recognize thoughts in a matter of minutes by asking some very simple questions, if the person is not barred from this discovery by their belief system..

As long as they do not seek to explain their access to non-physical phenomena, they can operate as normal human beings. They will just seem to know things and be in the right place for good things to happen.

Your post and my reaction to it illuminated the hidden barrier I have been trying to overcome for years.

If a person cannot perceive non-physical phenomena, they can be taught to do so, if their belief system allows them to do so.

This entry was posted in Alternate Realities, Learning New Things. Bookmark the permalink.